Lethargarians are a race of irresponsible, lazy, and slimy little creatures that have the ability to divide and multiply themselves. They live deep in the Doldrums, a terrible swamp of laziness and dread. They sit around sleeping every full day and they have a law which includes no thinking or laughing allowed and smiling only permitted on alternate Thursdays. This law is called Local Ordinance 175389-J and Local Ordinance 574381-W. They also have.

They also believe that thinking, reasoning, meditating, presuming, and speculating are unethical.

4 to 5: Loaf and Lounge until Dayley Evening Nap

The Lethargians are lazy, sleepy, lethargic and irresponsible creatures who prefer to do nothing all day. They can get upset whenever someone uses the word "Think", laugh or question their ways. They have fear towards Tock the Watchdog who chases them away. The Lethargians are also open to offer people to stay in the Doldrums

In the movie, the Lethargians are still the same as in the book with their personalities, traits and role, however, the Lethargians are given a villainous role as they sing Milo to sleep to prevent him from leaving trying to make him one of them and even try and chase him and Tock down as they try to escape the Doldrums.

In the original book, the Lethargians are portrayed as small grey human-like creatures who turn change color depending on the color of the surface like a chameleon.

In the 1970 Chuck Jones movie, the Lethargians appear as small, light yellow-green, slimy creatures that are almost see-through with three fingers on each hand, three toes on each foot, big noses, yellow lazy eyes with bags underneath, skinny limbs and strokes of hair sticking from the top of their heads.

In the movie, after Milo's encounter with the Whether Man, he proceeds on his way on his journey and as he drives down the long stretch of road leading to Dictionopolis. Milo becomes tired and proceeds to lay back in his car taking advantage of travelling through the Tollbooth commenting on the advantages of "Nobody telling him what to do, no decisions to make, nothing to think about and nothing to care about". Milo then proceeds to slowly fall asleep as his car approaches a fork in the road, where he accidentally drives his car down the wrong road and into the Doldrums where his car soon becomes stuck in the slime and melts slightly (Possibly effected by Milo's lack of thinking). When Milo wakes up, he wonders aloud where he is and soon he gets his answer from a Lethargian who falls onto his head and welcomes him to the Doldrums and introduces the Lethargians to Milo while demonstrating its ability to melt and multiply.

Seeing Milo adjust to their ways, the Lethargians grin and cackle as one of them force the indecision gauge of Milo's car from "Going?" to "Staying" possibly to prevent Milo from leaving.

As Milo sleepily waves the Lethargians towards him, the Lethargians in the swamp all seize the opportunity as the slime proceeds to swarm Milo's car, engulfing it as it melts more with Milo finishing the song with the Lethargians as he falls into a deep slumber.

However, seconds later, Tock arrives and scares away the Lethargians who leave the sleeping Milo in the progress. As Tock scares off the Lethargians, they scatter to their hiding places. Tock having found Milo, learns that he is killing time and tries to convince the boy not to spend the rest of his life in the Doldrums and tries to get him to leave. Unfortunately, Milo sleepily refuses having adjusted to the Lethargians' ways wanting to sleep.

Seeing Tock trying to help Milo, the Lethargians emerge from their hiding places and with angry looks proceed to creep their way towards the two. Noticing this, Tock tries once again to convince Milo to start thinking to no avail as Milo sleepily insists that he would rather not do anything. Tock explains that the Lethargians don't want Milo to do anything such as eating or breathing. Upon hearing this, Milo comes to his senses as Tock helps Milo with his escape getting him to think all sorts of things like "Birds that swim and fish that fly". As Milo does this, he becomes more awake and his thought manages to get the car out of its melted shape and start its engine and free from the slime with Tock's help pushing.

By then, the Lethargians proceed to crawl faster and faster determined to stop Milo and Tock from escaping until they form giant tidal waves. Luckily Milo's car gains enough power as both he and Tock jump a ravine out of the Doldrums as the unfortunate Lethargians fall into a cliff while trying to capture them.

When the Lethargians meet Milo, they welcome him to their home. However, they did get snappy at Milo for questioning their ways, laughing and using the word "Think" which the Lethargians didn't like as they preferred not to do anything. Since Milo was always bored with life, he soon adjusted to the Lethargians ways after they offered him to stay for a while.

In the movie, the Lethargians welcome Milo into the Doldrums and explain their ways to him while demonstrating their melting, merging and multiplying abilities. When Milo asks what they do in the Doldrums since they don't laugh or think which results them to sing their song to Milo causing him to become sleepy and sing along with them, unaware of their true nature as the Lethargians seize the opportunity to engulf his car in their slime and prevent him from leaving so they can stop him from doing anything, even eating and breathing.

In the movie, it is unknown what the Lethargians would've planned to do with Milo. It can be assumed that they had planned to make him one of them.

The Lethargians are terrified of Tock who they call "The Terrible Watchdog" as he is always barking at them and chasing them away.

In the movie, the relationship between Tock and the Lethargians are still the same, however, when Tock tries to help Milo escape, the Lethargians show more courage as they prepare to chase after the two. 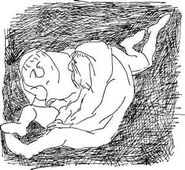 Milo reading the rule book with the Lethargarians.

The Lethargians after engulfing Milo's Car.

Tock being introduced in the movie
Community content is available under CC-BY-SA unless otherwise noted.
Advertisement