The Phantom Tollbooth Wiki
Register
Don't have an account?
Sign In
Advertisement
in: Character, Male, Bugs,
and 2 more

"This is the humbug, a very dislikeable fellow" -The Spelling Bee's opinion of the Humbug

The Humbug is a character of The Phantom Tollbooth. He went along with Milo on his adventure.

He first appeared at the Market Place in Dictionopolis. According to the book, he belonged to an old noble family, Insecticus Humbugium, which includes notable figures such as George Washington Humbug. He challenged the spelling bee to spell "preposterous" but the bee just refused to. They then got into a fight and ended up destroying the Marketplace. He is later seen attending the Royal Banquet, after which he is volunteered by King Azaz to accompany Milo on his journey.

Milo then saw Chroma the Great who was conducting the sunset. After Chroma finished, he told Milo to wake him up at 5:23 to conduct the sunrise. In the morning, Milo forgot to wake up Chroma. Tock wanted Milo to go wake Chroma, but Milo thought that it was a great idea to conduct himself but then messed up, discoloring the sky, ground, and other things. He then drove up to the Mountains of Ignorance and saw the Terrible Trivium. The Terrible Trivium made Milo, Tock, and the Humbug do worthless jobs. Humbug was the one that listened the most and even when Tock was pulling him away from the Terrible Trivium, he still did his job of making a hole in a cliff with a needle.

Then, Milo found a path to the Castle in the Air in order to rescue Rhyme and Reason but got stopped by the demons of ignorance. Milo defeated them and rescued the two princesses. Afterwards, there was a celebration and Milo said goodbye to Tock and the Humbug.

Book Appearance: Short and black; has a more bug-like face, with a long "nose" protruding from it.

Film Appearance: Skinny and teal; has a more anthropomorphic face, with the upper part of the mouth merged with the nose with rounded ridges underneath, representing a mustache. He's very slim, and has a brown-colored hat.

Always wears a suit, but in the film he doesn't wear pants.

The Humbug is quite arrogant, believing that everyone likes him. He is also a bit foolish, easily believing the Terrible Trivium's tasks are important, and believing that Milo (an inexperienced conductor) conducting the world's colors is a good idea. He also uses big words a lot and often complains. He doesn't like the spelling bee and often fights with him for small reasons. the humbug is very bossy. The Humbug is also very anxious, as he gets anxious easily and trembles a lot.

Milo and the Humbug have a good relationship. Milo got mad at the Humbug when he wanted to quit "breaking" the "door" to Digitopolis. After Chroma conducted the sunset, the Humbug suggested Milo conduct the sunrise. Milo thought that was a great idea but it wasn't because he was inexperienced. As a result, he temporarily messed up the sky. In the end, Humbug missed Milo who was leaving the lands beyond the tollbooth. Overall, Milo and the Humbug have a strong relationship

Humbug and Tock don't have as large a relationship as Milo and the Humbug. Tock didn't like Humbug's idea of Milo conducting the sunrise. However, Tock still likes the Humbug and vice versa.

The Humbug is nice to pretty much everyone except the Spelling Bee who thinks he's very hard to like. He appears to have met Ever-present Word Snatcher before. 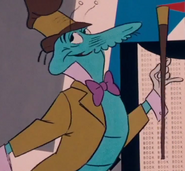 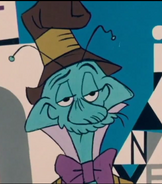