The Phantom Tollbooth Wiki
Register
Don't have an account?
Sign In
Advertisement
in: Character, Male, Main Characters,
and 4 more

Tock, a "watchdog", is one of the three central characters of The Phantom Tollbooth. He is always sniffing around to see that nobody wastes time. A wise and protective yet friendly biomechanical watchdog, he saves Milo in the Doldrums and accompanies him throughout his entire adventure, giving him answers to his questions and advice to fix his problems and keep him out of trouble throughout the story. He acts as a voice of reason.

Prior to his birth, Tock's mother and father had a puppy whom they named Tick, but when they first wound him up, he did not make a "ticking noise" as they anticipated. He went "tock" instead. Likewise, when the second puppy came into their world, the mother and father named him Tock, figuring that both of their children would make the same sound, but that backfired as well. Tock went "tick". So then, because their parents were unable to change their names, Tock and Tick are riddled with the burden of the wrong names forever.

He helped Milo get out by telling him "Since you got here by not thinking, it seems reasonable to expect that, in order to get out, you must start thinking." He described how people think time works in the Lands Beyond: "Once there was no time at all, and people found it very inconvenient. They never knew whether they were eating lunch or dinner, and they were always missing trains. So time was invented to help them keep track of the day and get places where they should. […] [W]e were given the job of seeing that no one wasted time again." He then hopped in Milo's car, and accompanies Milo throughout his journey, acting as a voice of reason. As Milo and Tock drive through miles of the new land, the two start to create a quite good friendship.

Tock is a dog with brown, straight fur. In the novel, he is depicted with a clock embedded on the left side of his body. As for in the movie he has to open up his stomach to show where the clock lies. Cleverly, the clock rings when something bad happens and it alarms him.

Always alert, kind, yet firm at the same time. He forms a strong bond with Milo.

Since their first meeting, Milo and Tock had become friends with Tock being the voice of reason for Milo as well as be his mentor.

Though Tock gets somewhat annoyed by the Humbug's snootiness and antics, he and him are still friends.

The Lethargians fear Tock who they call "The Terrible Watchdog" and are sent running when Tock barges into their swamp barking and chasing the Lethargians.

In the movie, while the Lethargians fear Tock, they show a more sinister side for when Tock tried to reason with Milo to get out of the Doldrums, he noticed the Lethargians' angry looks as they prepared to chase them and showed that while he watched the Lethargians, he also had a fear of them wanting to get him and Milo. 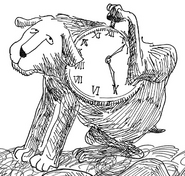 Tock in the novel

Milo and Tock in the film 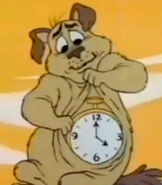 Tock as he exposes his clock in the film.